Meiya Mitsurugi is one of the characters from Muv-Luv, an ero game and anime property that I don’t know much about. This figure represents her as she appears in Muv-Luv Unlimited, which seems to be a game that locks young women in tight outfits in perilous combat with a host of aliens. Originally designed by Volks, I purchased this figure as a prepainted resin figure from Hobbyfan. I like Meiya’s character design and the fact that this figure was discounted was a nice sweetener.

The most obvious characteristic of this figure is its size. Meiya is huge. Colossal. She’s built in 1/4 scale, towering a shade under a mighty sixteen inches tall. Her sheer height makes it difficult to find a space for her. However, I favor larger figures so her size is a plus in my book.

Since Meiya is hand-built and hand-painted, I expected some problems. One of her hair ribbons snapped off during shipment; a little super glue fixed the damage. More glaring and less easy to fix was the problem with her arm. She is supposed to be drawing her sword from its scabbard, but one of her arms was glued on wrong; they are aligned so that the sword hilt lines up above her right hand.

Perhaps this is why this figure was so heavily discounted. I originally reviewed this figure back in March and since then I’ve chopped off her arm and repositioned it so that she is drawing her sword. I did a rather poor job pasting her arm back onto her body. The putty flakes easily, greatly complicating the simple task of gluing the limb, and it was pure guesswork as to what shade of blue I should use to paint the putty. Fortunately Tamiya blue is a close match and that her armpit is turned away from the intended viewing angle.

The rest of the figure is very nice. The paint job is good, and I particularly like the transparency of Meiya’s piloting suit. The figure stands surprisingly well on the base, although she is prone to tipping over if nudged.

The one big flaw aside, I’m pretty happy with this figure. The pose is very eye-catching and the character design is distinctive. I’m a big fan of cute anime girls in tight combat uniforms, and this is one of the coolest examples around. 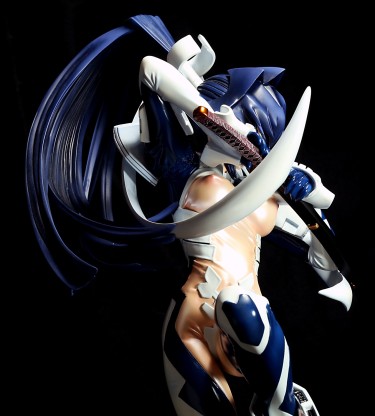 Back to the top

Back to the top
This entry was posted in Figure Review and tagged 1/4 scale, bodysuit, Figures, Hobbyfan, meiya mitsurugi, muv-luv, Review, sword, volks.