Today we’ll take a look at another leotard-wearing girl with an appearance in a fighting game – Cammy, quite possibly the reigning queen of them all. This figure is not new, having been released in March of 2018, but it’s a relatively recent pickup for me; I bought it during Kotobukiyua’s Memorial Day sale last year, partly due to a a moment of lockdown-induced ennui, but also because I’m a big fan of Cammy. I own a bunch of her figures, including her previous Bishoujo figure. I also have PCS’s Shadaloo Cammy and I’m expecting to receive PCS’s super-sized 1/3 scale Cammy soon. I don’t expect to review either statue, since they’re way too big for me to comfortably photograph and I don’t think there’s much interest here for statues meant for Western audiences; therefore, we’ll have to be content with looking at this figure. 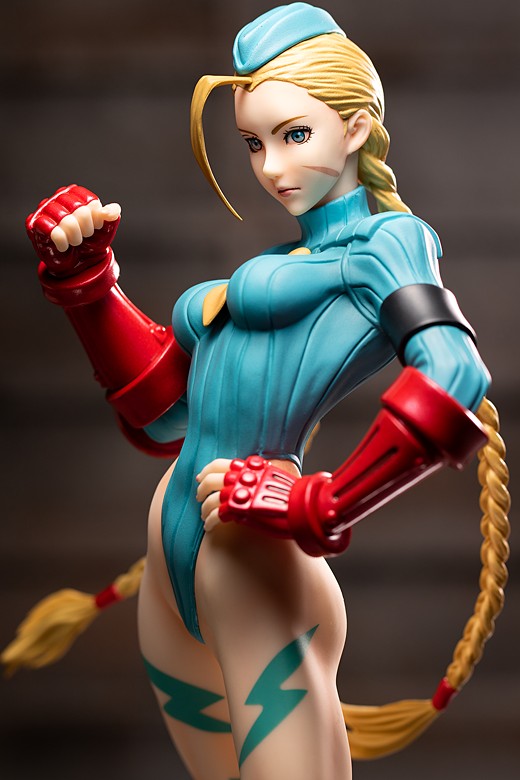 As mentioned, this figure was manufactured by Koyobukiya. She’s sculpted in 1/7 scale, standing about 20.5 centimeters in height. Like all of the figures in the Bishoujo series, she’s based off of an illustration by the artist Shunya Yamashita, and like many Kotobukiya figures, she’s basically ready for display right out of the box, which is a definite plus in my view.

Kotobukiya’s previous Cammy was posed in a dynamic, body-twisting stance that highlighted her chest and ass simultaneously; in contrast, this figure features a relatively sedate pose, with Cammy standing upright, one hand on her hip while flashing an unimpressed glare. Both styles have their own merits and advantages, but strangely enough, I think I prefer this less flashy pose over the more conspicuously salacious Delta Red version; the pose looks more natural, and Cammy always looks sexy regardless of what she’s doing.

I’m not as big a fan of Cammy’s Shadaloo costume versus her Delta Red uniform. I think it’s the hat; I like her beret better than the garrison cap. That said, the high-cut leotard still looks great.

Her pose looks fairly normal from the front, but a profile view shows that her back is arched in a most peculiar manner. It’s a little incongruous how the front view is fairly nondescript but the side view looks a bit strange.

Cammy’s leotard features a thong back, as is expected of her. It looks great, though her ass is perhaps not as defined as one would like.

The face is typical of Yamashita’s style; anyone familiar with his hallmarks (and that should include many figure collectors, given that the Bishoujo collection must number dozens of figures released over more than a decade of time) will easily be able to identify the source of this figure’s look.

I’d sum up this figure by saying that she looks pretty good and fans of Cammy will find much to like. Moreover, this figure didn’t cost that much, relatively speaking, and cost me less since I bought her during a holiday sale. This figure’s design certainly isn’t adventurous or evocative, but I think the simplicity works well, aside from the curiously contorted look of her pose from the side. Nonetheless, I do like this figure a lot and I think she’s a great addition to my Cammy collection.